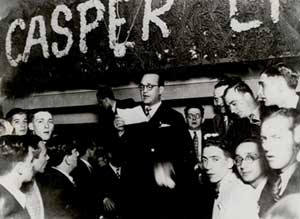 Born in Bragança Paulista, countryside of São Paulo, on  March 2nd, 1889, Cásper Líbero was a visionary man. Son of the doctor and Republican politician Honorio Líbero and Mrs Zerbina, one of the most respected ladies from Bragança Paulista; brother of Nelson and Jose. He had a great vision of marketing and a broad journalistic sensitivity, revolutionized the concept of journalism in the country.

On the turn of the XX Century, he moved from Bragança to the capital of the province, São Paulo. From that young boy – born from a family that defended the Republic since the time of the Empire – little by little, a young idealist was being formed, always wearing a suit, an overcoat, hat, large tortoise-shell eye-glasses and with a great personality.

When he was only 19 years, he graduated as bachelor in Law and Social Sciences in the Law School of the Largo de São Francisco, at that time the most respected institution of university-level teaching in Brazil. As a lawyer, he only worked for two years. He was also the Prosecutor for the Revenue Service for the government of the state of Mato Grosso. He also worked, a while before, as responsible for the branch office of the newspaper “O Estado de São Paulo” in the Brazilian capital at that time, the city of Rio de Janeiro.

In São Paulo, at 21 years of age he created the first news agency that was 100% national, the Americana, with branch offices in Rio de Janeiro and São Paulo, and at 23 years, he was one of the founders of the newspaper Última Hora, of large edition in the city of Rio de Janeiro, together with Olegario Mariano, Raul Pederneiras, Luiz peixoto e J. Carlos. Characterized by the strong criticism to the habits of those times and to the politics, the newspaper was closed under order of the Field-Marshall Hermes da Fonseca.

Antônio Augusto de Covello, the third owner of “A Gazeta” (after Adolfo Araújo and João Dente) he decides to sell it to the journalist Cásper Líbero. So, at 29 years in July the 14th, 1918, he became director and proprietor of the newspaper “A Gazeta” transforming this publication in one of the greatest vehicles of the press at that time. 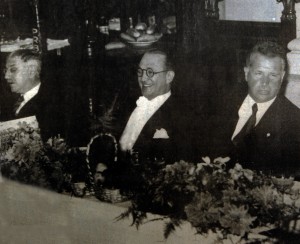 Cásper was the responsible for the modernization of the newspaper through the import of press machinery from Germany, and composition and graphic printing, being the first newspaper to print in colors in the country; he implemented new technologies with the usage of the rotation printing and the value of imagery in the paging; replaced the  telegraph for the new teletype; installed a new dynamic in the newspaper distribution, making it faster to reach readers in record-time, and at that time, to achieve this process, it had the largest fleet of delivery cars on the streets.

That young man from Bragança he was the first businessman/journalist in Brazil, capable to organize his newspaper “A Gazeta” in a way to obtain profits, without renouncing a correct and ethical journalism. With a vision of genius for marketing and a great journalistic sensitivity, he revolutionized the concept of journalism in the country.

However, the success for “A Gazeta” was not enough for the still young journalist. His aim was to create a communications compound.

In love with sports, he was the creator of “A Gazeta Esportiva”, published formerly as a column, and then as a newspaper supplement, and further it was as an independent, being then considered the most complete sports newspaper in Latin America – an achievement that Cásper ended up not witnessing, as he passed away four years before the inauguration of the sports newspaper (in 1947). He was also the responsible for the first broadcasts of a soccer match, which happened in Rio de Janeiro, through loud-speakers installed in downtown in the Vale do Anhangabaú, narrated over the telephone, in 1922. Only ten years afterwards the radios in São Paulo started broadcasting matches outside the capital. In 1934, the innovation came with the creation for the radio broadcasting the sound edition of “A Gazeta”, through the program Grande Jornal Falado ( Great Spoken Newspaper) in the Rádio Cruzeiro do Sul.

In order to house the new installations of “A Gazeta”, it was opened in 1939 the Press Palace as these headquarters would later be called, in the old newspaper head office, in the former Rua Consolação, number 88 – nowadays, Avenida Cásper Líbero.

The building was the first in the country specifically built to house the office, printing area, composition, paper printing and distribution of a newspaper. It had had an auditorium, a conference room called Center for Economic Debates Cásper Líbero, which hosted high-level attendees such as politicians and economists from Brazil and abroad, and a phonographic record library on the third floor, because Cásper Líbero already forecasted the acquisition of a radio broadcaster. On the top of the building, with eight floors, a restaurant and party room nearby, called “Roof of A Gazeta”, famous for the New Year´s Eve celebrations and for hosting diplomats, politicians, multinational CEOs, journalists from all over the world.

Cásper was an active supporter for sports in Brazil, in several modalities. It was him who created the international race on the 31st of December, the International Race of São Silvestre, which would originate years later, the Infant São Silvestre, a great party to incentive the practice of sports among children. It was also the creator of the Cycling Race Nove de Julho, in tribute to the Constitutional Revolution of 1932. Among other events that went into History as the Swimming Cross of São Paulo, on the Tiete River, the inner suburb field soccer tournament and the Brazilian University Graduates. 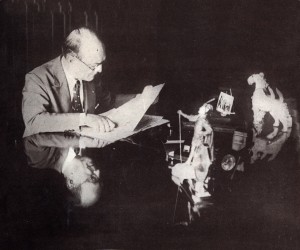 The decade of the 1940s marks the trajectory of the journalist. In 1943, with the wide spreading of radio in the country, Cásper Líbero invested massively in this new communication medium, acquiring the São Paulo pioneer broadcaster : Rádio Educadora Paulista, later known as Rádio Gazeta PRA-6, and nowadays Rádio Gazeta AM – opened on March 15th of that same year. The nickname of “the Elite broadcaster” was used in order to define the programming of the radio, segmented to the cultural elite of that time and emphasizing erudite and classical music. Rádio Gazeta was a major success of audience and critics with its refined musical programming – as a true school for musicians and singers and it was decisive for the improvement of great musical talents.

On the morning of the 17th of August, 1943, the airplane “City of Sao Paulo” from the VASP airlines, in which Cásper was traveling, collided with the Tower of the Naval Academy near the Guanabara Bay, in Rio de Janeiro. The tragic accident took away the journalist´s life, as well as of other famous passengers such as the Archbishop of São Paulo, Dom José Gaspar. It was a mass commotion in that time.

Before his death, Cásper left a will, in which he prescribed that his estate would go towards the creation of a foundation. The main objectives were to assure the future and the prosperity of its vehicles: A Gazeta, A Gazeta Esportiva and the Rádio Gazeta.

His visionary ideas would continue to have space and conditions to become reality. Cásper had no heirs, as he was not married and his two brothers did not need his resources. The journalist, therefore, left in his will the express desire that the foundation would be created in order to support the construction of a just and developed society, through qualified education and communication.

Thinking of preparing future journalists, Cásper left in his will the main pillars for the construction of that institution which would be the first Superior School of Journalism in Latin America. A solid institution for teaching, taking the same name of the patron, whose values of ethic and professionalism are taught until the current days.

The Fundação Cásper Líbero, which manages his estate, followed his desire and created the first school of journalism in the country. The Cásper Líbero University and TV Gazeta, already dreamt by the journalist, were some of the many legacies left by Cásper Líbero. In the first board of directors, even leaving his estate to the employees, he determined in the will that the brothers José and Nelson Líbero would have to be present. Nelson Líbero was chosen by the board of directors to be the first president of the new entity. On August 15th, 1944, it was built the Fundação Cásper Líbero  – a communications compound that includes, nowadays, TV Gazeta, Rádio Gazeta AM and FM, the newspaper A Gazeta and A Gazeta Esportiva.net, besides the Cásper Líbero University of Communication and the Business Citizenship Group. It is a non-profit institution that manages the estate left by the founder, the Gazeta Building, which has an area of 68,000 square meters with 14 floors that shelters all units of the Foundation. The building still has a theater with 900-people capacity and, on its top, there are the antennas of Rádio Gazeta FM and the tower for TV Gazeta, 85 meters high, one of the main city´s postcards and a reference in one of the main streets in São Paulo, the Avenida Paulista, in its most central region, on the number 900.

For our Foundation, Cásper Líbero continues alive in each of our works, through his great ideals.

Cásper did not have heirs: he was not married and his two brothers did not need his financial resources. On his will, he took care that his work had continuity, determining the creation of a foundation that would manage all his estate, keeping the communication companies and establishing as the priority objective the creation of a journalism school.